DevOps vs. Traditional IT: What are the Key Differences?

In the modern times, change is a constant entity and organizations need to remain parallel with this constant in order to survive and grow. Developers come from a mindset where change is what they are paid to accomplish. Businesses rely on them to respond to changing needs, so they are generally encouraged to improve, innovate, and produce as much as possible.

According to Statista, 42% of organizations across the world have embraced DevOps as the best way to streamline their development processes. And 30% of the companies have considered DevOps and yet to start it in the near future.

In contrast, operation sees change as the enemy. Businesses today keep lights on activities and offer services that generate money for business today. Performance resists change, as it reduces stability and reliability.

These objectives are independent of each other, but the organization must be able to function adequately, which means setting conflicting agendas and working for the common good. This is the basis of DevOps.

As DevOps is dominating, the DevOps vs Traditional IT debate is reaping in the minds of IT executives pertaining to their frustation with DevOps and the need for shifting legacy ITOps to modern DevOps model.

DevOps is a culture that fosters collaboration between the development team and management teams so that code can be quickly configured in production automatically and repetitively. The word ‘DevOps’ is a combination of two words’ development’ and ‘persecution’.

DevOps helps to accelerate the organization to provide applications and services. This allows organizations to serve their customers better and compete more vigorously in the market. Simply put, DevOps can be defined as the development and alignment of IT operations with better communication and collaboration.

Why is DevOps needed?

What is Traditional IT?

There is no uniform definition of Traditional IT. Still, it generally includes IT roles, which may not be listed under software development, but are intended to deliver and maintain the services, applications, and technologies needed to run a business. Responsible for ITOPS includes job titles such as System Administrator, Network Administrator, and Help Desk.

What does Traditional IT Cover?

How is DevOps different from Traditional IT

If we know the basics of DevOps and ITOps, it will be easy to understand the DevOps vs ITOps conflict. Below points show the comparision between DevOps and ITOps, explaining how DevOps is dominating the next generation IT operations.

The average DevOps teams only see two application failures per month and the response time to respond is less than 30 minutes for more than 50% of all respondents. 1% of DevOps teams can overcome shortcomings in less than a minute, while 40% of Traditional IT organizations need more than an hour to recover.

One of the leading practices of DevOps is to prepare for the possibility of failure. Continuous testing, alerts, monitoring, and feedback loops are maintained so that DevOps teams can respond quickly and efficiently. Traditional IT s groups are almost twice as likely to recover more than 60 minutes, while recovery DevOps teams are 33% more likely to improve in less than 30 minutes. Automated deployment and programmatically appropriate infrastructure are critical features for quick recovery.

At the heart of Traditional IT, the organization is an efficient schedule. As resources accumulate, projects are usually funded by SMEs. And in conflict with infrastructural features. To address this, enterprises have invested in state-of-the-art schedule planning systems.

Scheduling in a DevOps organization puts pressure on the local cell level. The combination of small batch sizes, dedicated teams, and automated processes makes it easier to ensure. How? First, the forecast is very limited shortly (2 – 3 weeks) where teams have useful insights. Second, there is no fight for people’s time because it is a dedicated team. Third, do not wait for the infrastructure as it is already defined and automatically provided. And fourth, it eliminates the use of loopbacks for growth and decision management.

Releasing application in a Traditional IT organization involves high risk . It is surrounded with issues, growth, and constant firefighting. The process needs to be strictly managed, controlled from the top level, and requires the continous involvement of all parts of the organization. It requires to set up a 24 × 7 battle room for IT operations for weeks before and after the release of the software application.

DevOps organizations, on the other hand, release software more often than non-events. They reduce the risk by having a daily integrated code in the trunk, by automated testing, making sure all environments are in sync, reducing the batch size (as indicated above), and so on. In other words, they promote the code from one stage to another until they are confident that they will work in the product. Thus, all enclosures related to the release window were removed, and they can transfer the new functionality into production in faster clips.

Both types of organizations create and share a ton of data. The difference is how the team uses the data. In Traditional IT, the information is prepared by experts (such as the operation team), who are bound in a large-scale report with other data, go through management approval, then share it with other managers, who then pass it on to their experts (testers and developers). In most cases, the report is unreadable, simply because there is a lot of data, not enough time, and not enough data. In other words, information is shared but poorly used, and hardly any action is taken.

In the DevOps organization, it is the team cell that collects and creates data. Since the data is to be used locally, it receives only the data (even automated) that is required by the team. And since the data is processed in a group, it eliminates the need to create long reports, manager approvals, and queuing time (sitting in some email boxes). As a result, the team can scan data and respond to it – resulting in faster response time.

The DevOps team at Pwdigitas work hards and remains updated with the modern SDLC practices. We primarily focus on improving processes and eliminate failures at the initial stages. Our all members work together right from the beginning with same excitement so that the applications can be released to the market faster and with quality. 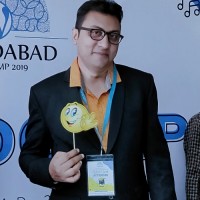 Vidyut is not just a Sr. Project Manager but also a key responsible person in Service Delivery and AWS Professional, pouring the same energy and enthusiasm.